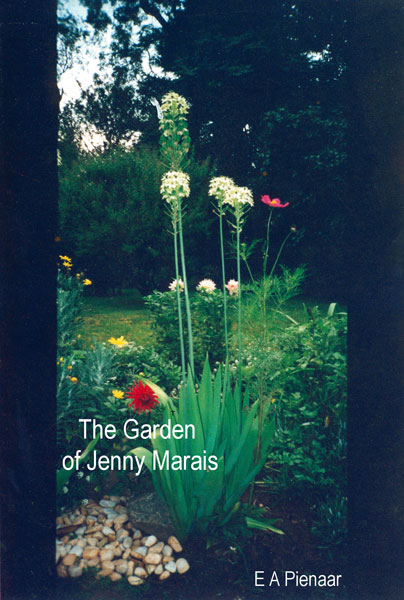 The Garden of Jenny Marais

Jenny Marais finds herself at the intersection of extremes so acutely present in Johannesburg: excessive wealth and dire poverty, hope and despair, brutality and kindness. When she witnesses street kids burying one of their own, the trauma sets her on an irrevocable path of destruction and rebirth. She tracks the children down, and develops an uneasy, unresolvable relationship with them. But the trauma has set something deeply buried free again, increasingly intrusive visions from another time, which lead her to abandon her ‘successful life’ in search of the ever more present ‘inner life.’ The question is – how much is Jenny prepared to give up to find her inner grail?
EXTRACT

‘The Garden of Jenny Marais  is an excellent novel about contemporary Johannesburg. It is escapist in a baroque way, outlining the meandering of otherworldly adventures as they surface in the quotidian city. It is also bravely real in its fine descriptions of the cities in-between places and its probing of the difficult border between the comfortable and the desperate. This is not a sentimental book even though it has its share of faeries.’

‘Gives words to the ‘psychosis’ of attempting to live in multiple social and psychic realities simultaneously.’

‘It deals with the question of what madness is with extraordinary courage and lack of shame. First, the heroine simply appears to have the same dual identities that every working woman in a patriarchal world is forced to adopt. Then the reader starts to wonder about dual personality disorder. Then there are flashbacks to past traumas, suggesting PTSD. Slowly these are fleshed out as happening in another time, and the reader grows aware of something deeply schizoid (also fascinating, as the past life increasingly suffuses the present). Then there are passages of such brilliance and colour, followed by visits to places of such galactic despair, as to suggest bipolar affective disorder. Spirit guides and aura readings are still comparatively tame by new age standards, but by the time thought-reading dogs, past-life regressions and fairies are threaded into the descriptions of everyday Jozi life, the reader has long since been ensnared.

Underneath it all lies the suggestion that to live in South Africa, to really think about what it means for the very rich to live alongside the poor and dispossessed, is to embrace madness — alongside this, reliving past-life torture in a medieval world isn’t that big a leap.’

Helen Moffett, author of A Girl Walks Into A Bar.